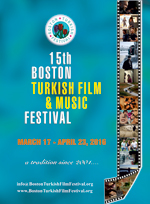 It is day 13 of the Boston Turkish Film Festival – closing day for the film portion of the festival – and they’re going out with a bang!

Today’s final film is the U.S. Premiere of the award-winning political thriller Frenzy, a dark look at two brothers who are on opposite sides of a terrorist campaign.

Frenzy screens at the Remis Auditorium at the Museum of Fine Arts at 2:00 PM – as always, film and ticket info is available by clicking the film title above.

Although the film portion of the festival is over today, they are about start the music portion of their festival, with three concerts scheduled over the next three weeks:

Seating is limited at the Goethe-Institut, so you need to click the above links to register and obtain ticket info.

It’s been a great run this year for the Boston Turkish Film Festival, and we look forward to seeing them put up another stellar lineup of films in 2017! In the meantime, you can check out complete coverage of this festival, as well as all the others between March 1 and May 1, on Subject:CINEMA‘s annual “Boston Springs A Fethival” double feature showcase shows the weekend of May 21st!