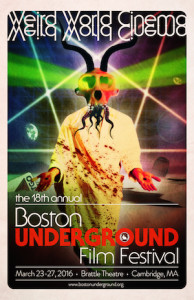 Well, it’s hard to believe, but it’s already coming to an end for another year – today is the final day for the 2016 Boston Underground Film Festival…::sniff::

But don’t be down, kiddies…there’s still a full day of entertainment options for BUFF‘s final day, and there’s a lot of great stuff to come today! Once again, things will be happening at both the Brattle Theatre and Harvard Film Archive in Cambridge, and it’s going to be one hell of a way to go out! Click on the titles below for full info and ticket purchase options!

2:00 PM   Rain The Color Of Blue With A Little Red In It (Harvard Film Archive)

NOOOOO! I don’t want it to be over AGAIN!  Why can’t we have this wonderful weirdness every week? It’s Not Fair!!!  Oh well, I guess I’ll have to go back to my boring, average life for another year…until it’s time for the 2017 BUFF to come around.

But you won’t be without just yet – coming up in the weeks ahead – reviews of several of the great films at this year’s fest, plus complete coverage of the fest and all its films on Subject:CINEMA‘s “Boston Springs A Fethival” Double Feature Weekend specials the weekend of May 21-22 – you won’t want to miss it!

Happy Trails to BUFF…until we meet again…same time next year? I sure hope so!