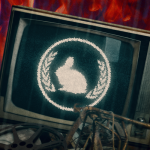 OMG OMG! The weekend is here – and the final two days of the Boston Underground Film Festival, happening NOW at Cambridge’s Brattle Theatre, are filled with fantastic programming!

And my FAVORITE event every year at BUFF since they started it three years ago is the first thing of the weekend – CEREAL AND CARTOONS! You heard me right, folks – Totally Saturday Morning Cartoons is two and a half hours of vintage cartoons from the 1980s and 1990s, and all the free cereal you can eat!  In past years, this has been a blast, with everything from popular Scooby-Doo episodes through obscure fun like Mr. T and Lancelot Link…so you don’t want to miss it!  It starts at 11:30 AM, and pajamas are encouraged (but NOT required, heh heh!)

Then after you’ve had your fill and are bouncing all over the place from all the sugar, it’s time to get SERIOUS. The first shorts series of Saturday’s programming is Two-Way Mirror, a collection of 13 mindsearing shorts about…welll…EVERYTHING!  Two Way Mirror screens at 2:45 PM.

Next up, this year’s Sound And Vision music video program – fun and subversive videos, some from artists you may know, and others from artists you’ll discover. Sound and Vision screens at 5:00 PM.

Then it’s time for Saturday’s feature programming, and it kicks off with We Are Still Here, a quirky little horror film that will remind a lot of people of films like the Amityville series of films, and the classic horror film Poltergeist. BUFF’s Melinda Green puts it thusly on their official site:

A paean to The Amityville Horror and Poltergeist, Ted Geoghegan’s directorial debut is old school horror bathed in the harvest gold and avocado—and blood, of course. We Are Still Here is an engaging throwback to the Lovecraftian fright fests of the late 70s and early 80s, where a family’s love could persevere even when buying the wrong fucking house in one weird fucking town.

Yee-ikes…this one should be interesting for those of you with strong constitutions (I have a feeling I wouldn’t last ten minutes…). The East Coast premiere of We Are Still Here screens at 6:45 PM.

Next, Bag Boy Lover Boy offers up more S&M treats, this time in the form of a photographer of S&M photo shoots who gets in a little over his head with his new model, plucked off the streets of New York. Described as gritty and funny at the same time, Bag Boy Lover Boy, a New England premiere, plays at 9:15 PM

Rounding out the Saturday programming at the Brattle is BUFF’s annual ‘push the limits as far as they’ll go” shorts program, this year titled Trigger Warning. Here’s why, from the website:

It’s a BUFF tradition to use this space as a disclaimer about the content of this shorts block, which in the past has gone by such charming titles as “Midnight Transgressions,” “Ocular Penetration,” and “Voltaire’s Angry Glove.” This year, we thought we’d spare some time and space by making the warning the title. Make no mistake, these are the most fucked-up of the bunch. It’s got everything you could hope for to trigger your PTSD-related panic attacks. Clowns, stalkers, Cronenbergian body-horror… it’s all here. Nothing that a little bit of therapy couldn’t fix.

Now, for those of you who prefer some alternative programming, take a short walk from the Brattle over to Cambridge’s bustling TastyBurger, because the BUFF Karaoke Party goes down tonight, starting at 1o PM in the downstairs area!

All in all, it’s one exhausting day of entertainment. And there’s one more day to go…Sunday is the final day of this year’s BUFF and we’ll have a run down of the events tomorrow morning! In the meantime, check out the official site at http://bostonunderground.org, and don’t forget to tweet that you’re getting all the goods from eCinemaBoston!