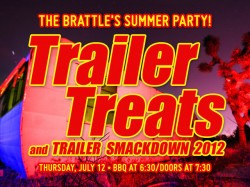 It has become a yearly tradition, and this year, the Brattle Theatre in Cambridge is celebrating the tenth anniversary of one of its most fun events!

The 10th annual Trailer Treats show is this Thursday, July 12.  And if you’ve never been, you should go, because it’s always lots of fun.

The Brattle staff puts together a collection of classic movie trailers of all shapes and sizes, from good films and bad, and strings them together for a show you won’t forget. And in the middle, they run the “Trailer Smackdown” contest. Each year as part of the show, filmmakers – both pro and amateur – are invited to submit a 3 minute trailer for a bogus film, using a list of special criteria. As it’s the tenth anniversary of the show, this year’s bogus trailers will be for a film called “Ten”, and no doubt there will be plenty of interpretations – comedy, horror, crime drama, you name it, the entrants will probably have done it. The top entrants are screened for the Trailer Treats audience and voted on, with the winner getting a small cash prize.

This year, the festivities get underway a bit early if you want to join in with dinner from Blue Ribbon BBQ in West Newton. They have great food, and there will also be music and entertainment during the dinner portion of the show.

And you can no doubt bet that Brattle director Ned Hinkle will have picked out a favorite cartoon short to kick off the actual Trailer Treats portion of the show.

Kim and I go every year (well, we TRY – last year we got the dates mixed up) and it’s ALWAYS a blast! So come and have fun, and we hope to see you there!