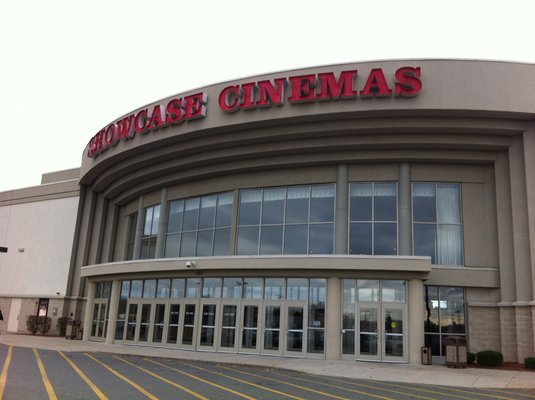 I am utterly APPALLED by the news, which broke yesterday, that Showcase Cinemas has decided to close one of the oldest theaters in their chain, our home base, Showcase Revere.

I’m so angry I can’t even talk about this yet, but needless to say  the property, which according to an article in the Revere Journal newspaper National Amusements‘ partner in the property, Northbridge Properties, which has been leasing the land to Showcase, will take full ownership and control of, is planning to raze the theater and lease the land to Amazon for the construction of another new distribution center. Amazon, of course, moved into the location which formerly housed the Necco company on VFW Parkway last year.

The closure of Showcase Cinemas Revere will mean that the closest first-run multiplex theaters to the area will be the AMC Assembly location in Somerville, AMC Liberty Tree Mall in Danvers, and the new Arclight Cinemas at North Station in Boston.  It will leave Boston’s immediate North Shore communities – East Boston, Chelsea, Revere, Lynn, Saugus, Lynnfield, Malden, Melrose, and Wakefield –  without a major cinema complex in that area for the first time since the 1950s. It will make it extremely difficult for families who have patronized Showcase for generations to find a new place to patronize, adding extra time and expense to the already rising expenses for their trip to the theatre.

The utterly outrageous cavalier attitude by Mayor Brian Arrigo and Ward 6 City Councillor Richard Serino in this matter makes me angry as well; Arrigo actually used the COVID-19 Pandemic as an excuse for his agreement to this situation:

“Unfortunately, the theater industry has suffered an extraordinary blow during the pandemic. That, coupled with the fact that the Revere multiplex design is an outmoded concept for the industry’s future, has accelerated consideration about the theater’s viability at its current location. Showcase Cinema has been a good neighbor for all our city, and we will work with them and any future occupants of the valuable property for the benefit of all our city.”

OUTMODED? OUTMODED? As National Amusements themselves have drummed into everyone’s head for the past five years, the Revere Showcase CInema is the most advanced theater of its kind in the entire Showcase chain – it contains 20 screens, including a deluxe Showcase XS Giant Screen theater and a state of the art MD4X Motion theater, top of the line stadium seating, top of the line sound systems, major deals with streaming partners like the Metropolitan Opera and Fathom Events, a much loved Chatters Bar and Grill restaurant, and more.

Showcase is also one of the biggest employers in the city – I believe it was 2nd or 3rd on the list before the pandemic struck. Do you think the many friendly seniors who work part time at Showcase are going to be able to handle working somewhere like an Amazon facility?  DO YOU?  Maybe we’ll have to send them to the Wal-Mart in Lynn to work…if they can get there, that is…

And Councillor Serino seems to be more concerned more with traffic patterns and taxes than anything else in this issue:

“I am thrilled that the redevelopment of Showcase Cinema will be one that will not bring more residential units, but rather job opportunities for Revere residents, revenue from increased property taxes, new excise taxes paid to the City and projected to have less of a traffic impact than that of the current movie theater. I am proud to work hand-in-hand with city leaders, Attorney D’Ambrosio and Amazon officials to ensure that this will be a development we can all be proud of, and one that will be great for Ward 6 residents for years to come.”

Tell me, Councillor, are you going to guarantee those job opportunities you are so looking forward to are going to be offered to Revere residents FIRST? Are you also going to find a way to provide a relatively inexpensive means of entertainment for the hundreds of families in Ward 6 that presently use the theatre? Are you going to pay the extra expenses for their trouble just trying to have a night out with the family? Are you going to get anything back from the money they’ll now be spending OUTSIDE the city in Danvers, Somerville, or Boston?  No? Yeah, that’s what I thought.

The least the politicians could have done for Revere and the surrounding communities was to guarantee a NEW cinema/entertainment complex would be built in the area in a specific time frame, say within two years. But, no, they didn’t even do that. We have a firm “maybe” from National Amusements about possibly opening a theater in another location. And to my knowledge, the city has done NOTHING to attract other potential cinema companies – AMC, Arclight, Alamo, or even more locally based Patriot or Entertainment Cinemas – to the area, especially in the new Suffolk Downs complex now being planned.

And yes, for me, this is PERSONAL. Showcase Revere is OUR HOME THEATRE. We live within walking distance of it. We are one bus stop away from it. We have spent thousands of dollars over the years at this cinema. And we don’t have a car, so it makes it difficult for us to get to any other location without a ton of extra expenses. And I’m not happy that National Amusements, Northbridge Properties, and the Revere City Council agreed to this whole thing WITHOUT even consulting the people of Revere about it.  When you host one of the longest running cinema podcasts on the web, Subject:CINEMA, now in it’s 14th year, currently curtailed a bit by the pandemic, it’s going to be extremely frustrating that we’re going to have spend a TON of extra money to see new releases in out of the way theatres and believe me, that point will NOT be forgotten come election time, either.

I will prepare a more formal and pleasant farewell to Showcase Revere when I’ve calmed down a bit. But the loss of this great cinema complex is going to create a huge void in Revere and the surrounding communities for YEARS to come….

The full story on this can be found at the Revere Journal’s website HERE!