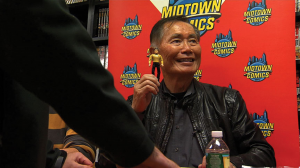 The documentary “To Be Takei”, about the life and unique POV of actor George Takei, opens the 30th Annual Boston LGBT Film Festival tonight at the Institute for Contemporary Art in boston, kicking off more than a week of films celebrating life in the LGBT community.

Takei has become an outspoken LGBT proponent since coming out several years ago, and in this film, Takei talks about his life both in and out of the closet, as well as his childhood in a World War II interment camp, and his long career as one of the most popular character actors in show business. Best known for his role as Sulu in the “Star Trek” TV series and six followup feature films, Takei’s open and refreshing look at life will delight everyone.

The Boston LGBT Film Festival will run through Saturday, April 12 with screenings at a number of venues including the Brattle Theatre in Cambridge, the Coolidge Corner Theatre in Brookline, the Remis Auditorium @ The Museum of Fine Art in Boston, and the Bright Family Screening Room @ the Arts/Emerson Paramount Theatre in Downtown Crossing. eCinemaBoston and Indie Film Spotlight will have daily schedules and coverage of films in this year’s festival each morning throughout the fest.

A complete wrap up of the festival will also be a part of the Third Annual “Boston Springs A Fethival” podcast on Subject:CINEMA on Sunday, May 4.