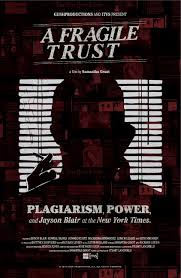 The 2014 edition of the Salem Film Fest opened Thursday evening as a near sell-out crowd was in attendance for opening night film “A Fragile Trust“, a story of journalistic ethics based around the story of former New York Times reporter Jayson Blair, the most well known plagiarist of our time. Blair brought shame and scandal to the top newspaper in the US when he admitted to copying parts of stories from all over and using them as his own back in the early 2000s.

Director Samantha Grant was in attendance at the screening, and afterward answered questions from the packed house about her film. She told the audience of her dogged pursuit of Blair to get him to be a part of the film, and her persistence had paid off, with an in-depth interview with Blair, who presented his own side of the story. She also had in-depth interviews with many people from the staff of the NYT at the time of the scandal, and it makes for a very balanced portrait. When she polled the audience about their feelings for Blair as she answered questions, the audience reaction split nearly 50/50 – half the audience felt sympathetic about Blair as he told his side of the story, while the other half admitting to hating Blair, finding him full of excuses and his own arrogance.

Kim briefly spoke with Grant following the Q&A and she will have her opinions about this discussion on Subject:CINEMA next week. I spoke with a number of attendees, and one gentleman, who had actually been seated next to me, said he thought the film was good but questioned its present relevance, because Grant admitted it had taken seven years to do the film, and the gentleman was of the opinion that Blair had already faded from public memory and didn’t warrant any further attention.

Grant was also presented with the Women Filmmakers EDA award, which they present each  year to the best film directed by a woman at the Salem Film Fest. Grant was totally surprised by the presentation and indicated how honored she was to get such an award.

“A Fragile Trust” continues to play the festival circuit, and will have it’s television debut on PBS’ series “Independent Lens” beginning May 5; check local listings for date and time in your area.

Our full review of “A Fragile Trust” will appear on a future edition of Subject:CINEMA. You can find more information on the film at its official website, http://afragiletrust.com.