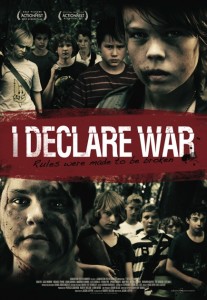 Tonight, the Boston Underground Film Festival kicks off it’s fifteenth awesome year of off the wall always entertaining programming with I DECLARE WAR, one of the big audience hits of last September’s Toronto Film Festival.  And it kicks off a huge six week period that is an annual ritual in Boston, the spring film festival season. It’s the busiest multiple- festival season for any major city in the country that I’ve been able to find – no other major metropolitian city has as many festivals in the same time span than Boston does every year.

In a normal year, the festival circuit would be one bigger, with five festivals in six weeks.  BUFF would be in second place and the season would have started probably last weekend, but the Irish Film Festival took 2013 off to regroup and so BUFF is this year’s launching point.  Between tonight and mid-May, four of Boston’s nine major or mini-major film festivals (there are also dozens of smaller festivals in the Boston area each year) – Boston Underground, Boston International, Independent Film Festival of Boston, and Boston LGBT – will take place.

And I think it’s hilarious, although definitely fitting, that  the festivals almost always identify themselves as “Boston”, but quite frequently they’re really just part-Boston, and sometimes not really Boston at all, technically.

For instance The Boston Underground Film Festival will take place entirely at the Brattle Theatre in Cambridge for the second year in a row, and before that was held at the Kendall Square Cinema, also in Cambridge; IFFB and LGBT are scattered around the various venues in the Boston metro area, with IFFB screening most of their films everywhere BUT Boston proper – in Somerville, Brookline, and Cambridge. LGBT actually does have most of its films in Boston, with a few in Cambridge and Brookline. Only Boston International is actually completely in Boston, with all of its screenings held at AMC Boston Common downtown.

Ok, OK all city-oriented teasing aside. I have to say this – Boston has the BEST DAMN FESTIVAL CIRCUIT in the country. Bar None. Including the January Big Four. Including Tribeca. Including Los Angeles. And Seattle as well. NOBODY CAN TOUCH US! Because the Boston Film Scene ROCKS!

As we have done since 2011, Subject:CINEMA will present a podcast devoted to the Boston festival scene in Late April, including these four fests plus the Salem Film Fest from early March. Our third annual “Boston Springs A Fethival” show will be available Sunday, April 28th, right smack dab in the middle of the IFFB. We’ll also have extensive coverage of all four festivals here on PNRBoston as well as Popcorn N Roses and Indie Film Spotlight in the days and weeks ahead.

Dates, lineups (except LGBT which hasn’t announced it’s slate yet), and ticket info can be found on each fest site. In order, here we go: